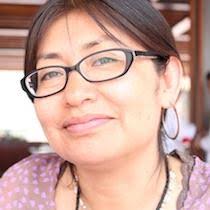 Emiliana Cruz is originally from San Juan Quiahije, Oaxaca. She received her PhD in Linguistic Anthropology from the University of Texas Austin (UT) in 2011. She specializes in social and linguistic anthropology. Her work focuses mainly on the application of anthropological methods for the documentation and preservation of languages now approaching extinction.  In particular, she works with Chatino communities in Oaxaca using participatory research methods in which she works directly with communities and creates with them pedagogical materials for the preservation of language and culture. Her areas of interest in anthropology are education, decolonization, social movements, language revitalization, mobility, autonomy and territory, linguistic rights, and material culture. Emiliana Cruz worked as a professor and researcher at the University of Massachusetts-Amherst (UMass) and currently works at CIESAS-CDMX. Likewise, she has organized workshops for both the elaboration of pedagogical grammars and tones for speakers of Otomangue languages. She is a native speaker of Chatino and founder of the Chatino Language Documentation Project.